The Definition of Alzheimer’s disease (AD)

Here is how Terry Pratchett defined his Alzheimer’s Disease: “It occurred to me that at one point it was like I had two diseases – one was Alzheimer’s, and the other was knowing I had Alzheimer’s.”

Alzheimer’s Disease, the most common form of dementia, is a progressive and degenerative illness characterized by the gradual deterioration of brain cells, resulting in progressive cognitive impairment. The degrading of nerve cells is thought to be caused by the accumulation of abnormally folded proteins leading to atrophy, or shrinkage, in affected brain regions. This process is responsible for the numerous behavioral, cognitive, and physiological impairments that grow in severity as the dementia advances.

As Alzheimer’s disease spreads throughout the brain, function in diseased areas is diminished.

As we age, some changes are common to most of us: our wit dulls, our bodies slow, our hair greys, and our senses decline. If all of these things take place in healthy populations, is it possible to distinguish the symptoms of Alzheimer’s or other forms of dementia from normal aging? The difference is, while intermittent memory lapses can be mildly annoying, daily performance is not seriously impeded.

Signs of normal aging are:

It can be difficult to delineate one form of dementia from another, given that they can occur in tandem, but there are tests that can increase the accuracy of a diagnosis. Those typically include the following: 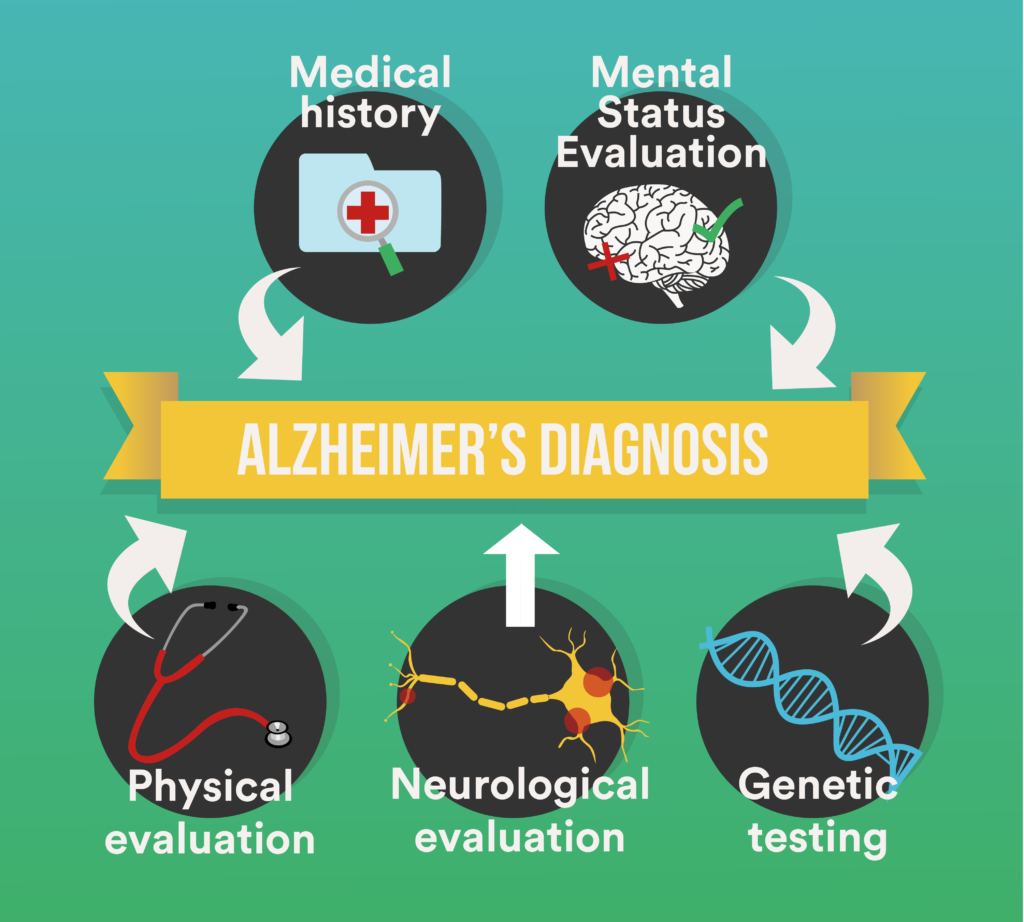 The average life expectancy of individuals with Alzheimer’s disease is 4 to 8 years, but some live with the disease for over 20 years. Deaths are usually caused by infection, malnutrition or dehydration but, in the absence of these secondary conditions, AD will eventually cause the body to shut down.

MCI is characterized by issues with processing and retaining information that go beyond what are generally thought of as normal age-related impairments, but are not severe enough to significantly impede one’s normal routine.

Symptoms of MCI are as follows:

MCI can also result in changes to a person’s mood or temperament, including:

My wife had noticed that I would sometimes get lost when running errands and forget appointments. This news was particularly disconcerting due to my family’s history with dementia.

The described symptoms of forgetfulness and disorientation are consistent with mild cognitive impairment, and it is not uncommon for close friends and family to become aware of these setbacks before the person, as it was for the above individual. 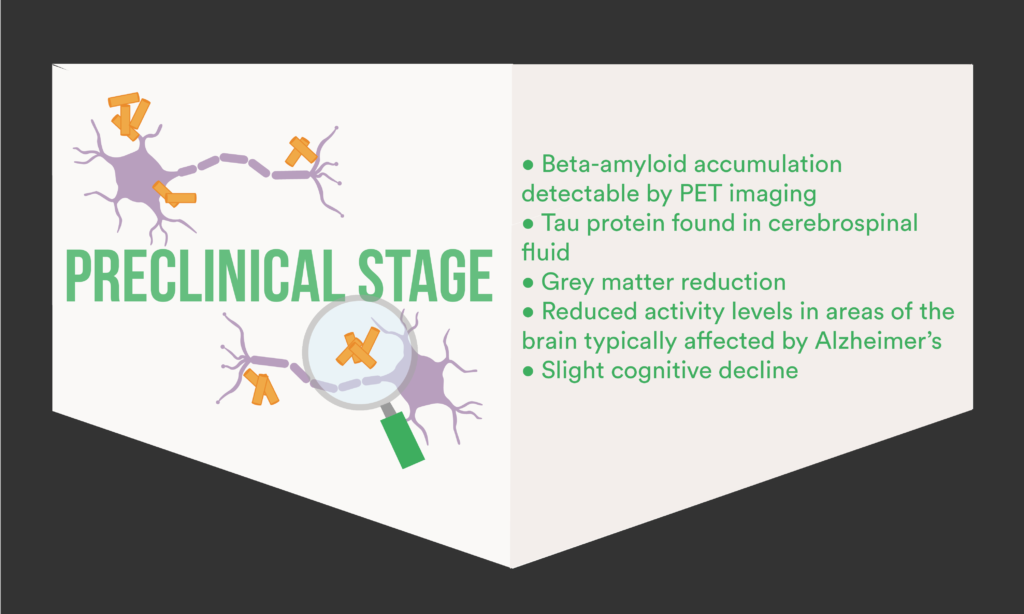 This is a newly defined stage of Alzheimer’s disease (AD) where changes in the brain begin to occur before memory, cognition, mood, or behavior is measurably or severely impacted.

Individuals in this state may never develop the disease, but possess some of the known biological markers. People affected cover the gamut from being entirely asymptomatic to presenting early signs of cognitive decline that do not qualify as what is referred to as mild cognitive impairment(MCI).

Signs and symptoms of preclinical AD are: 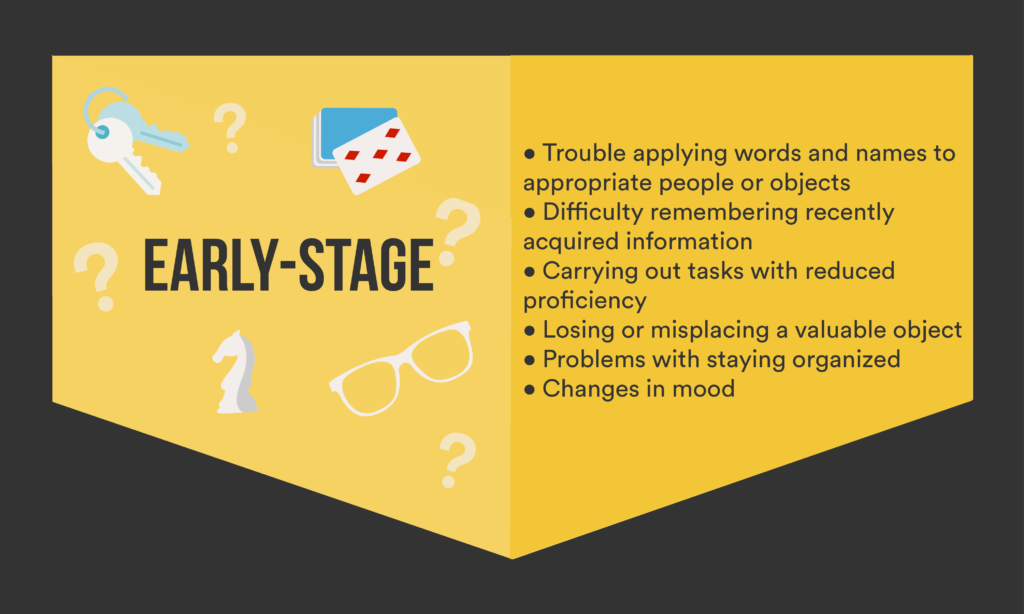 The goddesses of forgetfulness and memory, Lethe and Mnemosyne, are a capricious pair. At their whim, we can be propelled to the heights of wisdom or the depths of madness. Following an Alzheimer’s diagnosis, I now found myself at their mercy, which was often absent for those they would wantonly dement. As time carried on, my grasp on reality was slipping. Days would blend together, things would disappear, and obligations would be forgotten. The mind I had cultivated over a lifetime, was now slowly waning. Those unaware of my illness tended to disregard my behavior as simple products of thoughtlessness and discourtesy.

I was ill equipped to face the beasts that loomed ever nearer, threatening to take all that I am. Despite knowing that I could not last forever, I would dedicate everything to staving off its procession.

My daughter came by often. When talking about the implications of my illness she would usually provide some platitude to placate my fears, but despite their naivete, her words heartened me. I knew that no matter how much the disease changed me, she would be by my side.

Early-stage Alzheimer’s disease is diagnosed when issues with memory and thinking become more apparent, such that daily functions are hindered. The person is still capable of independent activities in this stage.

Those afflicted with Alzheimer’s disease in this stage may experience some of the following symptoms: 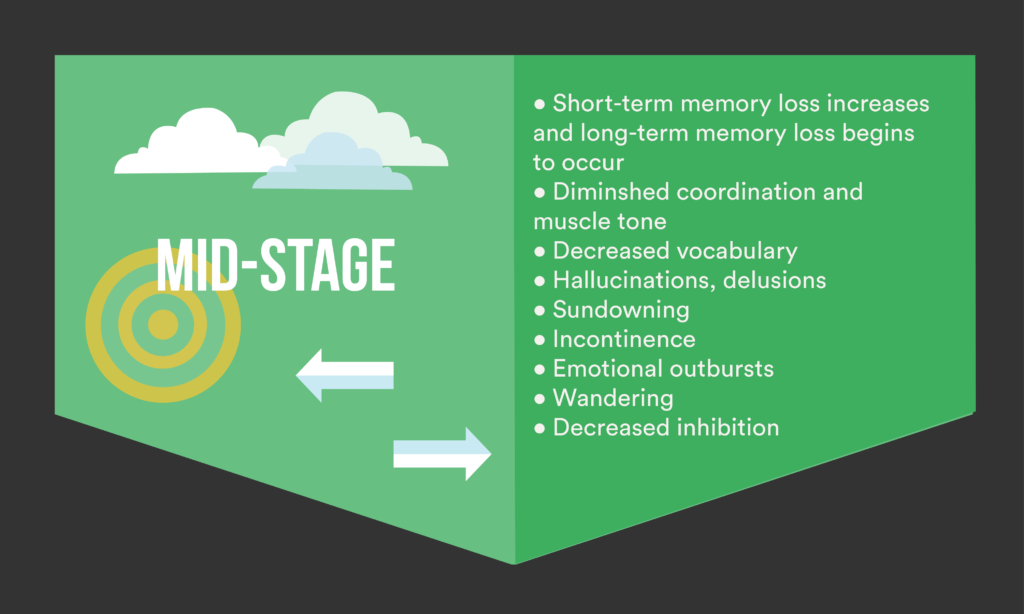 My mother had started to see things and keep odd hour, often spending the night yelling profanities at the illusory dogs that harassed her. Once the dawn came, the incorporeal canines would leave her be and she would return to her normal self; a kind, god-fearing woman who would sooner die than utter a lick of profanity. I loved her dearly, in spite of what she had become, but I would be lying if I said that watching her slowly dwindle before my eyes didn’t bring me pain.

The disease progression now causes a number of behavioral and neuro-psychological changes. People lose much of their ability to carry out basic activities and their long-term memory is impacted, typically becoming more dependent on caregiving.

Here are this stage’s symptoms:

My aunt had been incapable of self-care or speech for a while, and the nurses informed me that she was no longer able to walk. I found her sitting in her favorite red wicker chair, gazing idly with her lips pursed as she hummed some broken tune. “Hello, Mara! Have you been well?” To which she provided no response, as had been the norm for quite some time. I continued, “So, what colors would you like today?”, again, came no reply. I found a jar of periwinkle and began painting, though faint tremble in her hands made the task slightly more difficult. I noticed her eyes staring blankly into my own. The moments of lucidity that once filled me with hope were now little more than cruel taunts of a disease that had all but destroyed the woman for whom I cared dearly. I knew that her dwindling flame would shortly fade, but instead of heartache, I almost felt relief.

In this stage of the disease, individuals with dementia are almost entirely reliant upon caregivers as a result of their worsening condition.

This stage’s symptoms include: 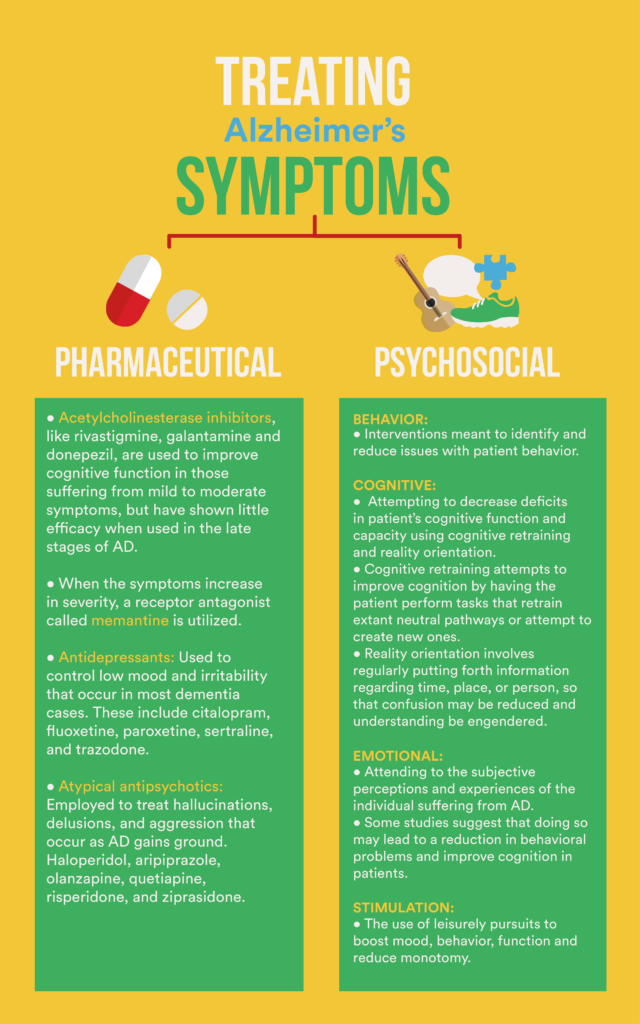 There are no known cures, nor means of significantly slowing the illness, but palliative measures exist and are intended to aid with quality of life on this difficult journey.

A number of medications are used to maintain mental function, but these only provide a temporary fix that may or may not be useful for limited periods of time.

There are techniques to help those with AD cope with their illness and symptoms in a more positive manner. While there are a number of approaches that have little to no scientific evidence supporting their efficacy, many can be used to reduce stress, ease social interaction, and comfort individuals with AD. 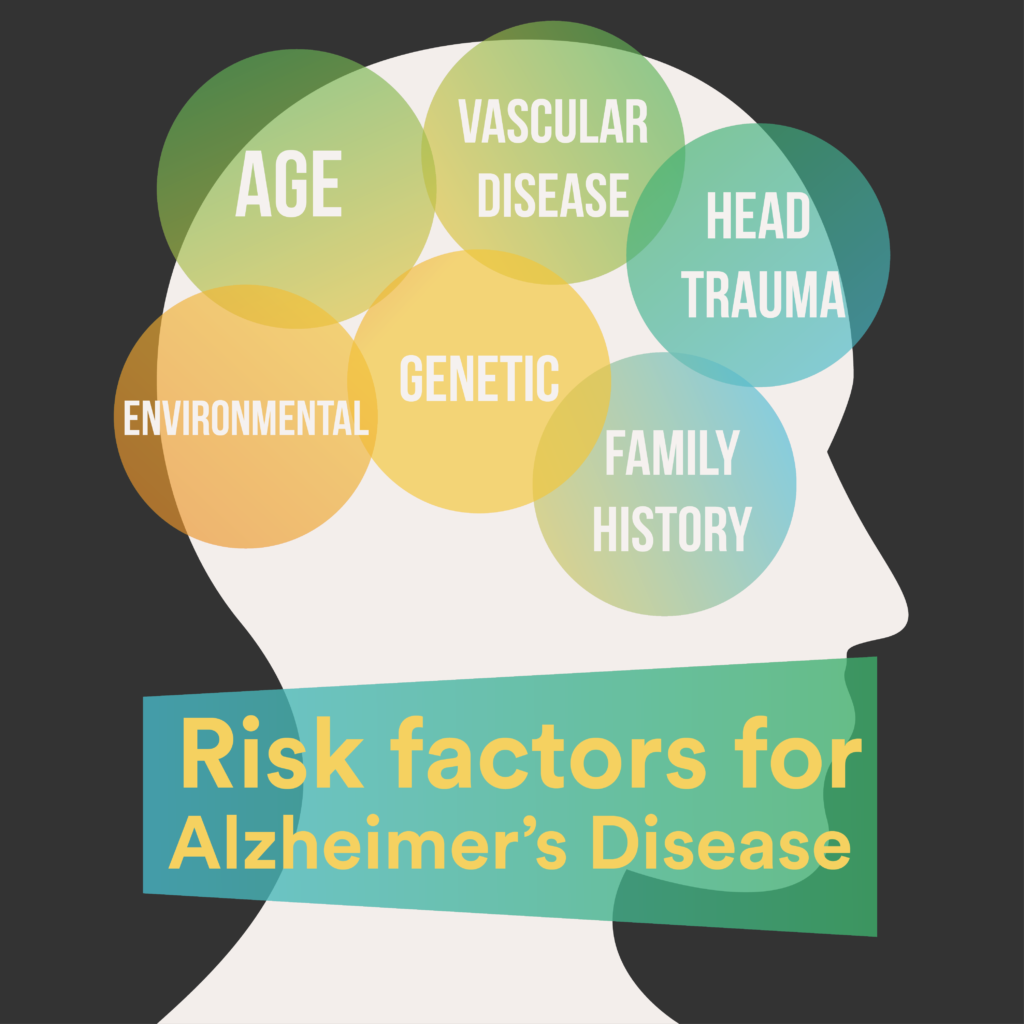 There are a number of characteristics and conditions that can increase one’s chances of developing Alzheimer’s; however, It should be noted that the presence of one or more of the following factors does not necessarily mean that the disease will manifest.

The likelihood of developing AD doubles every 5 years after reaching the age of 65, a point of major concern, as this age group is the fastest growing with the increase in longevity and the shift of the Baby Boomer generation into older age.

Exposure to high amounts of certain metals, air pollutants, nutrition, various pesticides, and stress have been linked to AD.

Individuals with one or more relatives with AD are more likely to develop the disease, due to heredity and/or environment.

There are genes that increase one’s risk of developing Alzheimer’s by facilitating the formation of longer- form amyloid beta peptide plaque clusters between nerve cells, the presence of which is believed to result in neurodegeneration. The genes are as follows; Apolipoprotein E 4 (ApoE-ε4), Amyloid precursor protein (APP), Presenilin-1 and 2 (PS-1 and PS-2).

Those with a history of head trauma are 4.5 times more likely to suffer from AD than those without. This has to do to with the chemical changes that may occur as a result of brain injury.

Hypertension, high cholesterol, stroke, heart disease, and many other medical issues that negatively impact the circulatory system significantly raise one’s chances of AD. Reasons for this include strokes or extant damage to the brain’s vessels, which raise the likelihood of Alzheimer’s symptoms appearing once tangles and plaques arise in their brains.

Most people would naturally prefer to avoid the prospect of facing Alzheimer’s. It is said the people fear losing their memory as much or more than they fear death. As daunting as this possibility may be, it is important to not let our own fear and biases negatively affect those who are experiencing the disease. Knowledge about Alzheimer’s symptoms and progression of the disease can allow for sound medical and legal planning and decisions to be made as soon as possible. A diagnosis can also provide the family some relief, knowing the reason for worrisome symptoms and making a plan for how to move forward.

Looking for a caregiver?
We have high-quality, affordable caregivers you can count on at CareLinx.
Find care