An individual’s capabilities are prone to change over the span of a lifetime, and while people in general may have an innate desire to maintain their autonomy and independence indefinitely, the realities of aging and illness often create obstacles to autonomy. When the time comes that it is found that an elder loved one is no longer able to make sound decisions regarding their health needs and best financial interests, appointing a guardian or conservator to act on their behalf often becomes the best solution.

We hope this article will serve as a resource for individuals who are in the process of deciding whether to avail themselves of this option, and to shed light on the workings of guardianships and conservatorships.

What is a Conservatorship?

A conservatorship, also referred to as a guardianship of the estate, typically grants one or more court-appointed people the power to make estate planning decisions on financial matters for someone who is found to be unable to manage his or her affairs due to infirmity or impairment.

If the court finds that the conservatee is capable of having some input on these matters then a limited conservatorship will be granted. This allows the conservatee a greater say in certain areas. A conservator’s job in those cases usually involves managing the economic resources of the individual deemed to some degree unfit. Depending on the circumstances, conservator duties may extend to:

There are two forms of conservatorship:

This entails a court-appointed person to care for individuals who are unable to care for themselves or their assets for reasons found sufficient by the courts.

Any individual can petition the courts to initiate this process. Sufficient evidence of the conservatee’s inability to manage his or her affairs is required prior to the appointment of a conservator. A probate conservator’s appointment is usually permanent. 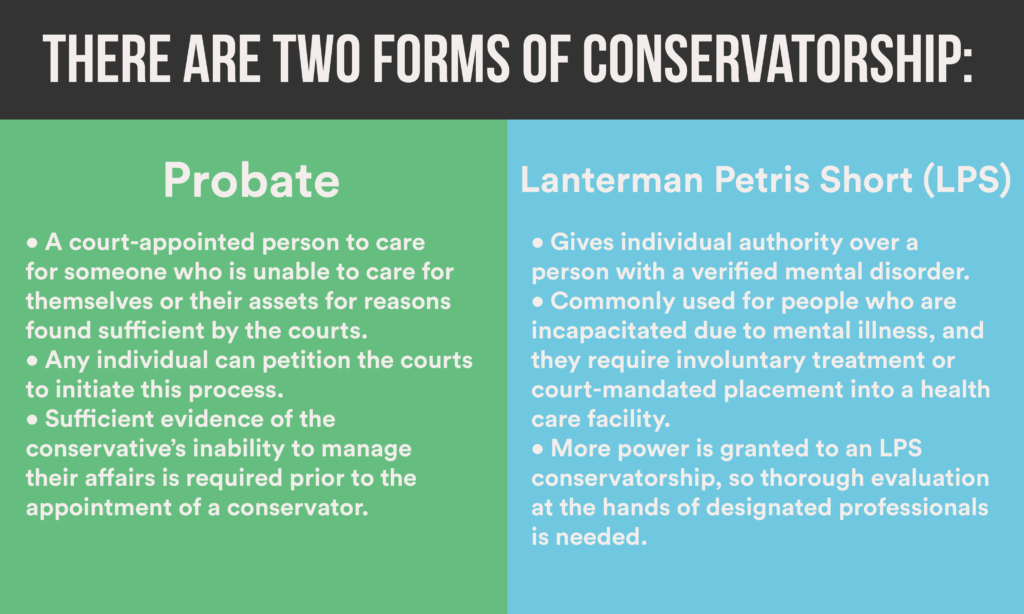 This is a specific type of conservatorship that gives an individual authority over a person with a verified mental disorder that is found in the Diagnostic and Statistical Manual of Mental Disorders(DSM), a list of diagnosed mental illnesses.

These are commonly used for people who are incapacitated due to mental illness, and they require involuntary treatment or court-mandated placement into a health care facility. Because more power is granted to an LPS conservatorship, a thorough evaluation at the hands of designated professionals is needed to initiate the process. The conservatorship is granted for 30 days initially and, if needed, thereafter extended for a year, with annual extensions upon re-applying. 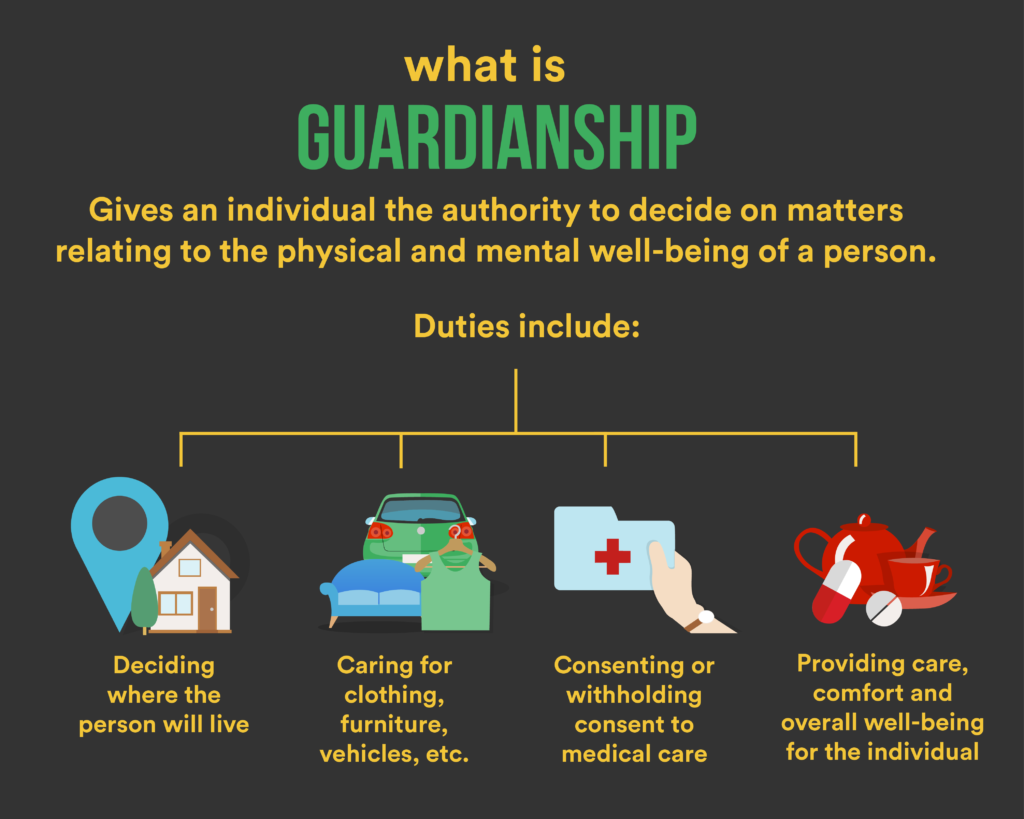 What is a Guardianship?

The “ward” is the person in regard to whom a court appoints a guardian. A guardianship of a person gives an individual the authority to decide on matters relating to the physical and mental well-being of an individual who, following an investigation, is deemed unable to do so by the courts. In some instances, a “plenary guardianship” extends to both the person and his or her estate. The powers of the legal guardian may be broad or limited depending on the capacity of their ward and their other arrangements. The duties of the plenary guardian include:

During court proceedings, a guardian “ad litem” may be appointed; this is someone appointed to act on behalf of the ward in a court case. Their duties are to: 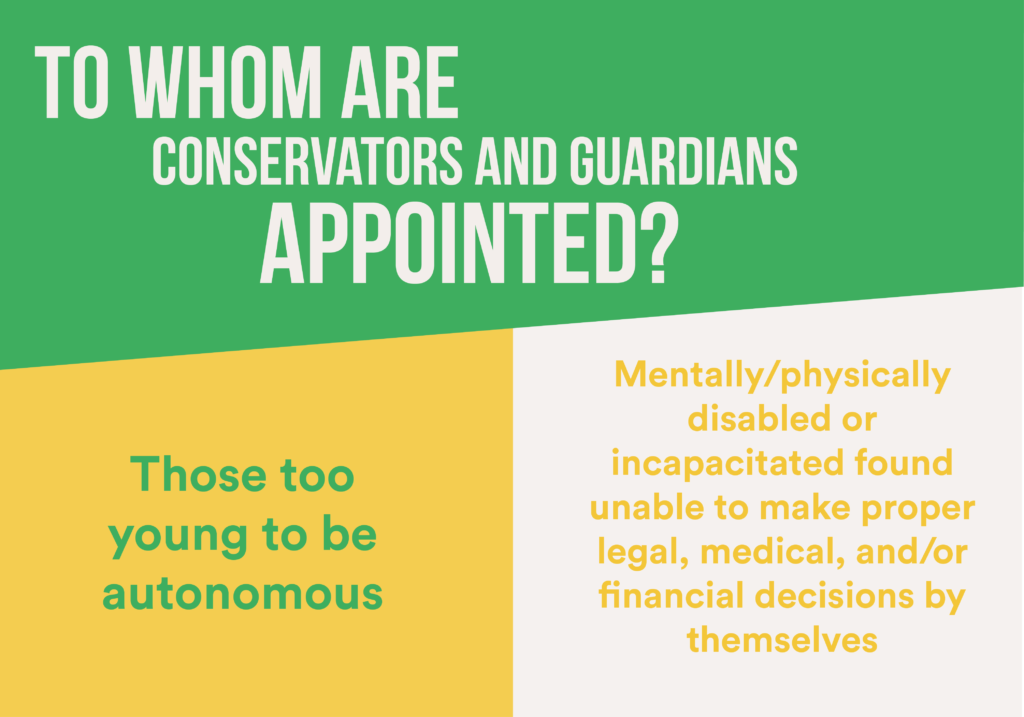 Individuals to Whom Conservators or Guardians are Appointed

Guardians and conservators are appointed to individuals who are either too young to be autonomous, as in the case of a child, or are mentally or physically incapacitated and unable on their own to make proper legal, medical, and financial decisions. The authority of the guardian may be limited in accordance with the degree of their ward’s incapacity. Reasons for these appointments include: 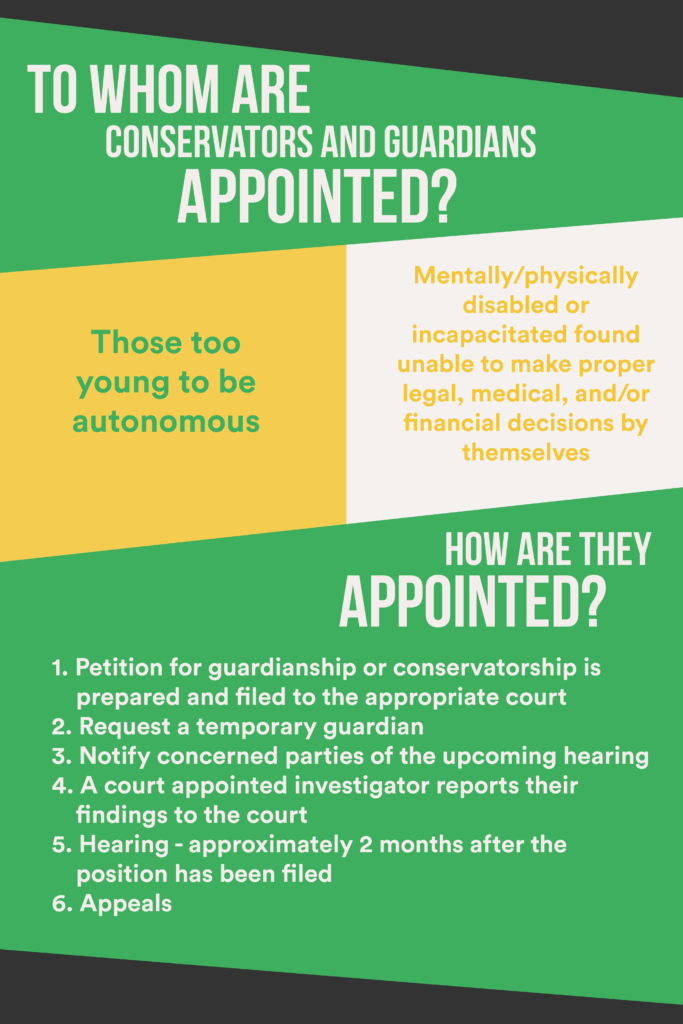 How Guardians and Conservators are Appointed

While the particular methods and laws regarding the appointment of a conservator or guardian differ slightly from state to state, they tend to follow these basic parameters:

Individuals Who Act as Guardians or Conservators

Appointing a guardian or conservator can be difficult and costly, and one of the more difficult aspects of this process can be the task of vetting those interested and qualified to hold this position.

Those who tend to be granted the position of guardian or conservator are usually competent and interested members of one’s family or court-appointed attorneys. Given the high potential for exploitation or misuse that such an appointment would afford a guardian or conservator, individuals with outstanding debts or criminal records are eliminated as a matter of course.

Qualifications Needed for Guardians and Conservators

The conditions that must be met by potential guardians and conservators have been the subject of federal inquiries. The Government Accountability Organization(GAO) continually look into the prevalence of exploitation, neglect and abuse of seniors in the guardianship system, and why these misuses of authority are possible. GAO investigators focus on instances in which guardians used their power to embezzle or misappropriate, or those who stole or improperly obtained assets from incapacitated victims.

In the majority of cases, the GAO found that the potential guardians were poorly vetted, and that there was inadequate scrutiny of guardians or conservators after they were assigned the position. In addition, in an effort to determine the extent of the problem, the GAO made use of fake personas to satisfy the stipulations for guardianship certification in several states, only to find that the courts involved in many instances did not perform proper background checks on the fake applicants. To protect wards and their assets from those who would abuse them, courts have devised a myriad of vetting procedures in place for finding potential guardians. The conditions that must be met may differ depending on where the case has been filed, but there are some basic rules:

After being appointed the guardian must: 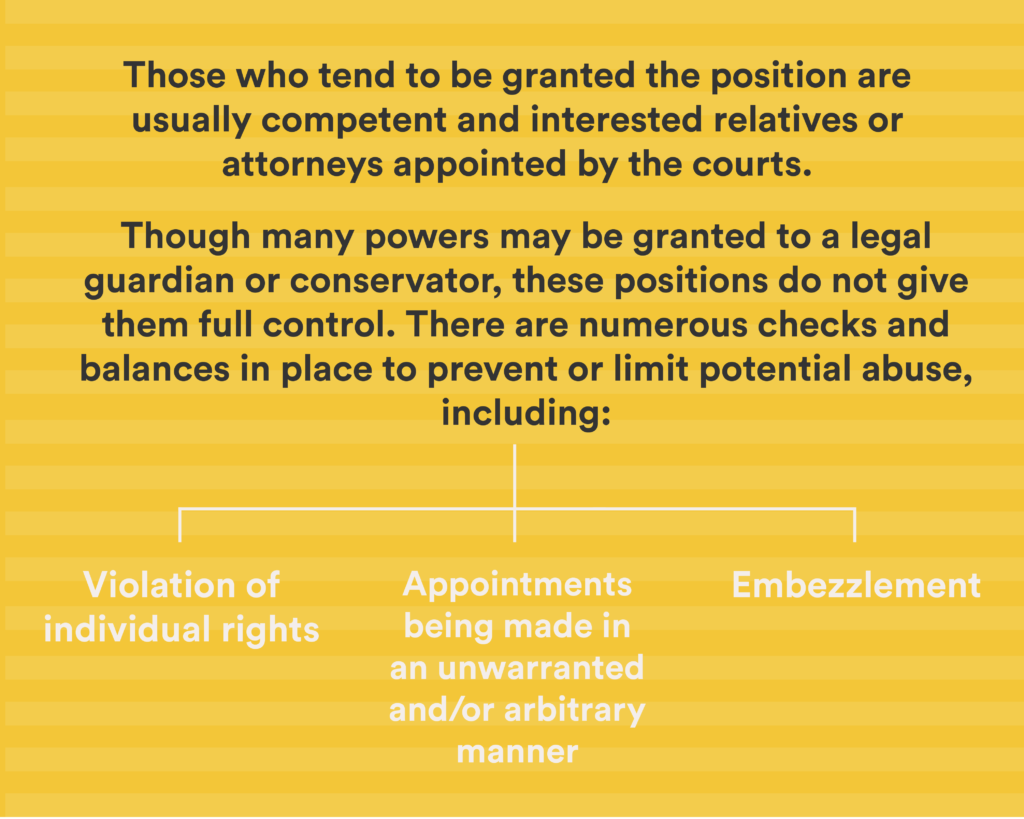 Individuals Harmed by Guardians and Conservators

While there are obviously good intentions behind conservatorships and guardianships, many criticize them as violations of individual rights. There are numerous cases of these appointments being made in unwarranted or arbitrary manners where the laws and protections intended to defend the ward and their estate failed:

Protections and Safeguards Against Guardian Abuse

It is possible for an individual, providing they are of sound mind, to appoint individuals to choose an agent to care for their affairs. Appointing people to serve as agents or executors should they become incapacitated can help protect against undesirable outcomes from a court-appointed conservator or guardian who may or may not have known them prior to their impaired state. Here are some measures that you can take to maintain some degree of control:

A power of attorney is a document in which an individual, referred to as the principal or grantor, appoints someone else, referred to as the agent or attorney-in-fact. The attorney-in-fact is granted the ability to act on behalf of the principal in the capacity specified in the document on certain matters, such as financial, business, medical, legal, and more. Though these powers tend to be limited and will expire if the person is medically incapacitated or dies, the person can determine when and how their agent can utilize their powers depending on what they believe they require.

This document endows an individual with the right to make healthcare decisions for the principal when they are unable to give consent or their ability to do so is limited to a sufficient degree.

A revocable trust can be put in place with a reliable entity or set of entities serving as trustees to hold the assets of another person.

This is an individual or organization assigned to handle payments from welfare or other entitlement programs for another person who is unable to manage them. 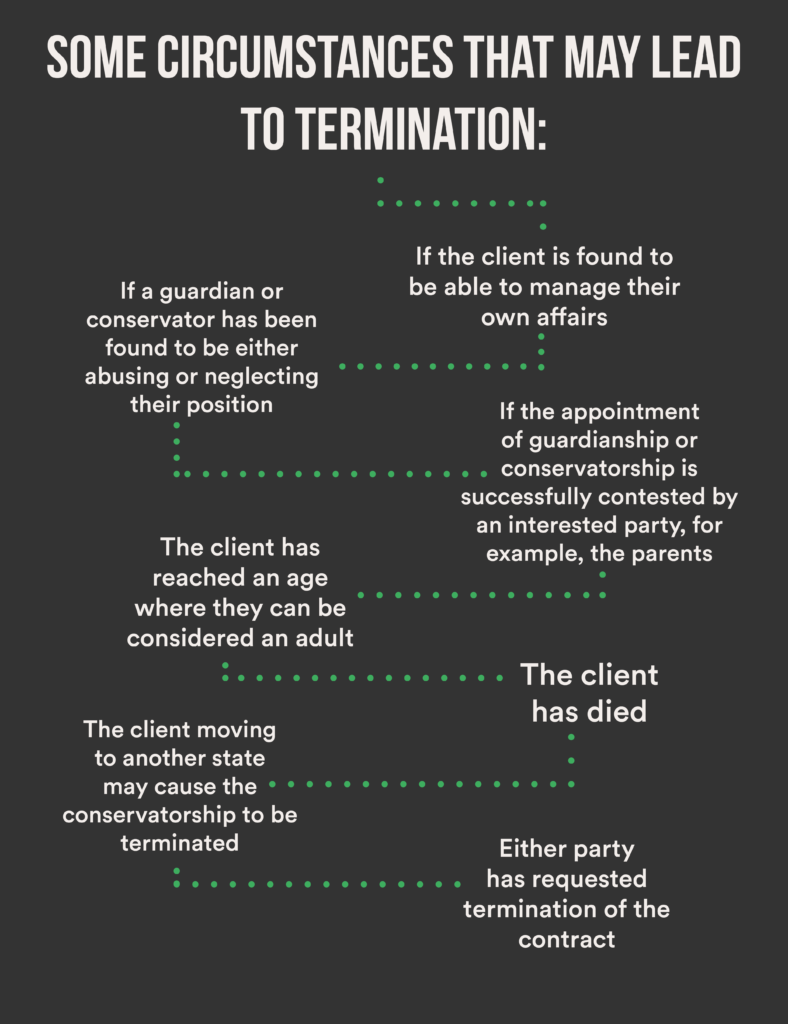 How to Void or End a Guardianship or Conservatorship

Though many powers may be granted to a legal guardian or conservator, these positions do not give conservators absolute and perpetual control over the lives or affairs of their wards. There are numerous checks and balances in place to prevent or limit potential abuse, and there are situations that can lead to the termination of a guardianship or conservatorship. Here are circumstances that may lead to the dissolution of this contract:

Because conservatorships and guardianships entail such high levels of trust and responsibilities, families seeking to protect loved ones from an uncertain future need to exercise utmost due diligence and careful planning. Appointing a guardian or conservator can be helpful, but it should by no means be the first or only course of action pursued by those who look after a loved one who is incapacitated. If you are considering this avenue, the first thing to do is to educate yourself as much as possible and, if feasible, consult a lawyer or elder care attorney. As you are likely aware, matters concerning the care of loved ones are not trifle matters and, when handled carelessly, can be incredibly costly. Make sure to educate yourself about your options and seek the counsel of an attorney so you can be as informed and prepared as possible.

Looking for a caregiver?
We have high-quality, affordable caregivers you can count on at CareLinx.
Find care