What are Silver Alerts (SA)?

What is the Aim of Silver Alerts?

The goal of these alerts is to protect older adults or cognitively impaired adults from injuries and potential death that may easily occur when they are lost or go missing. The alerts provide local, state authorities, and the general public information that may prove critical in facilitating the person’s safe return.

What Information is Distributed?

The information that is distributed is that which that law enforcement agencies believe to be useful in locating the lost individual: photographs, description of their vehicle if they were driving, last known location, their home location, and medical condition. All this relevant information is what is often transmitted locally or throughout the state to assist in the person’s safe return.

How do Silver Alerts go into Effect?

The investigating law enforcement agencies tend to be responsible for deciding to activate a Silver Alert once they determine a case warrants such a response. Law enforcement agencies, or public safety organizations, distribute information regarding the lost individual to the pertinent agencies and select media outlets that then broadcast the information to the public using dynamic message signs on roadways, radio stations, mobile phones, the internet, and television. The alert comes to an end once the lost individual is located.

This necessary criteria can differ from state to state, but there are some features that are consistent between states that have Silver Alerts or similar programs. Older age or having a diagnosed cognitive impairment or disability are two of the most common criteria that are used. Age and cognitive impairment naturally present grave risks to the health, well-being, and safety of those who go missing. It is estimated that about half of those suffering from dementia who go missing for more than 24 hours will either be severely hurt or die, and over eighty percent will die after being missing for 72 hours, which is why efforts like this are critical.

Over the last decade, states have implemented programs that are similar to Amber Alerts. They aid in the location and retrieval of missing elderly, cognitively impaired, and/or disabled adults. Many attribute the public’s support of these measures to the significant media coverage given to tragic cases involving cognitively impaired older adults who were injured or died after they went missing. The following tragic events are believed to be, at least in part, responsible for the creation of Silver Alerts and similar programs:

The following twenty-seven states have locating and retrieval systems, known as “Silver Alerts”, for lost folks: 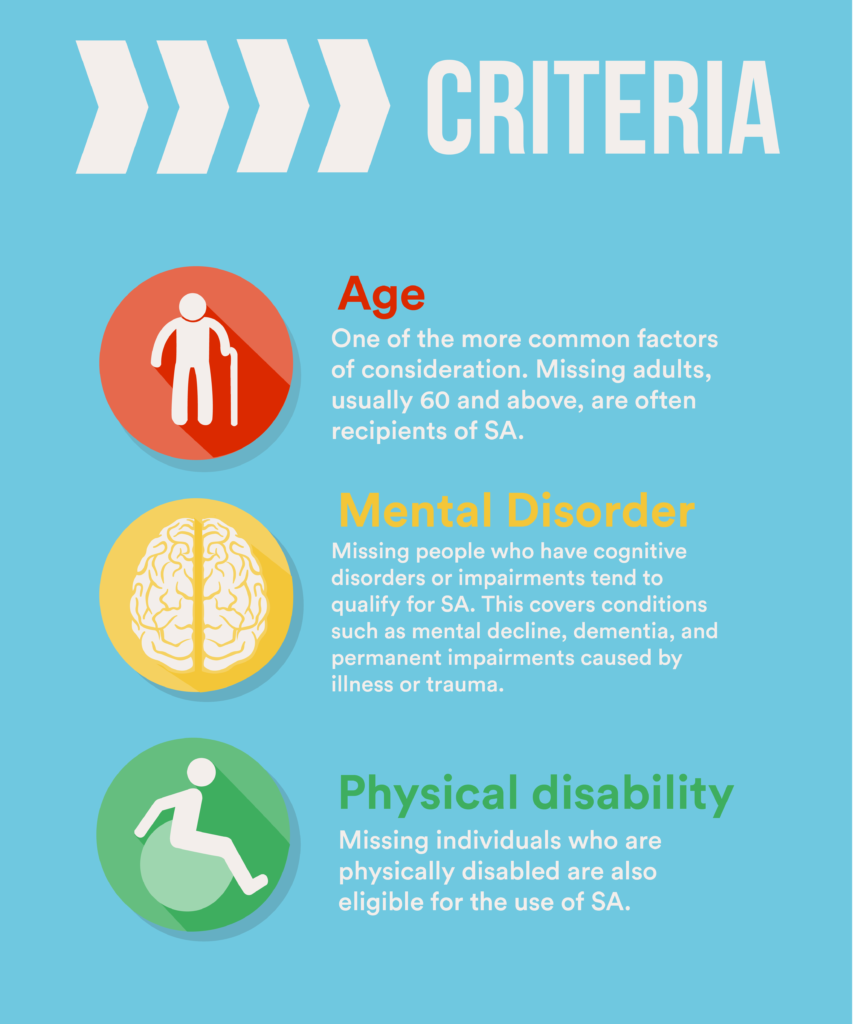 Nine states have systems to find and retrieve lost seniors that are not formally referred to as “Silver Alert” but include requirements similar to other programs: 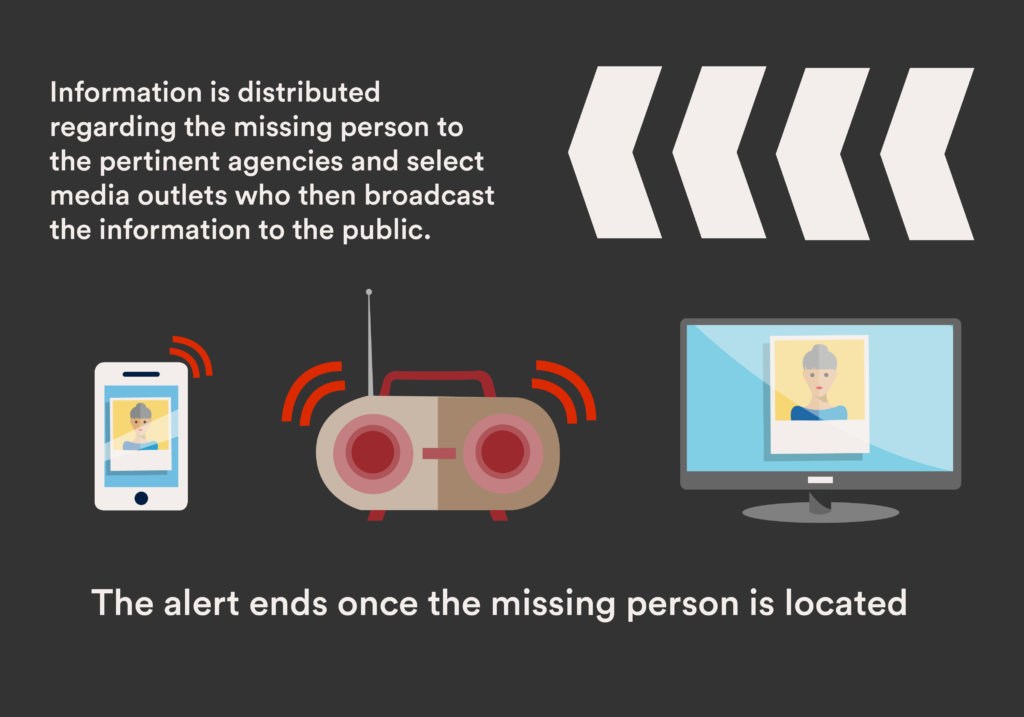 Of the remaining 14 states, 8 have lost-person alert systems that include wide-ranging missing-individual requirements, while the balance of six states do not as yet have alert systems

What police agency can release a Silver Alert?

The local police are usually the first to know about a Silver Alert. Following verification (i.e. age 60 or older, has cognitive impairment) the local police will send the information to a state agency such as the Department of Public Safety, State Police or Highway Patrol, Department of Law Enforcement, the State Bureau of Investigation, a State Center for Missing Persons or the State Attorney General. One of these agencies will then issue a State Wide Silver Alert.

What to do if one sees the Silver Alert person?

Call 911 to notify law enforcement of where you have seen the person.

I have a family member with Alzheimer’s disease. How do I register him for Silver Alert?

There is not a registration for Silver Alert. The program is available to anyone who suffers from cognitive impairment.

What should I do if a loved one with Alzheimer’s disease is driving and doesn’t return home when expected?

Call 911 to notify law enforcement that your loved one has Alzheimer’s and has not returned when expected. Be prepared to provide a description of your loved one, along with the vehicle they are driving, the license tag information, and the whereabouts they were intended to go. More useful information is more helpful.

How long do the highway signs stay active for a Silver Alert?

The amount of time highway signs stay active vary from state to state. What is known is that if elders are not located within the first 24 hours of missing, up to half are likely to suffer from injury or death. Therefore, states will often keep missing alert information on their respective state websites that are dedicated to elder safety.

Silver alerts are not the only color-coded alert program. The Amber Alert system is the model upon which both Silver and Blue Alerts are based. All of these programs use the media to provide the public with information regarding missing people and suspects at large in an effort to expand the chances of locating these individuals.

America’s Missing, Broadcast Emergency Response Alert, and Amber Alerts: These are issued for a minor, i.e. a person under 18, who is abducted or missing and is considered to be at increased risk of injury or worst.

The first AMBER Alert was implemented in 1996 in Texas after the death of Amber Hagerman. The program adopted the victim’s first name. This program spread with widespread recognition throughout the nation. Information regarding the abductee, depiction of the alleged perpetrator, and their vehicle was transmitted to the public using a number of media venues. The criteria for activation such alerts are as follows:

Blue alerts are issued following the injury or murder of an on-duty police officer. They are principally concerned with finding and apprehending the perpetrator. The National Blue Alert Act of 2015 was enacted on May 19, 2015. It is designed to protect police officers across the nation.

These are the activation criteria for Blue Alerts:

Yellow alerts consist of a California alert issued after a hit-and-run that results in the death or injury of an individual. Requirements for activation are as follows: 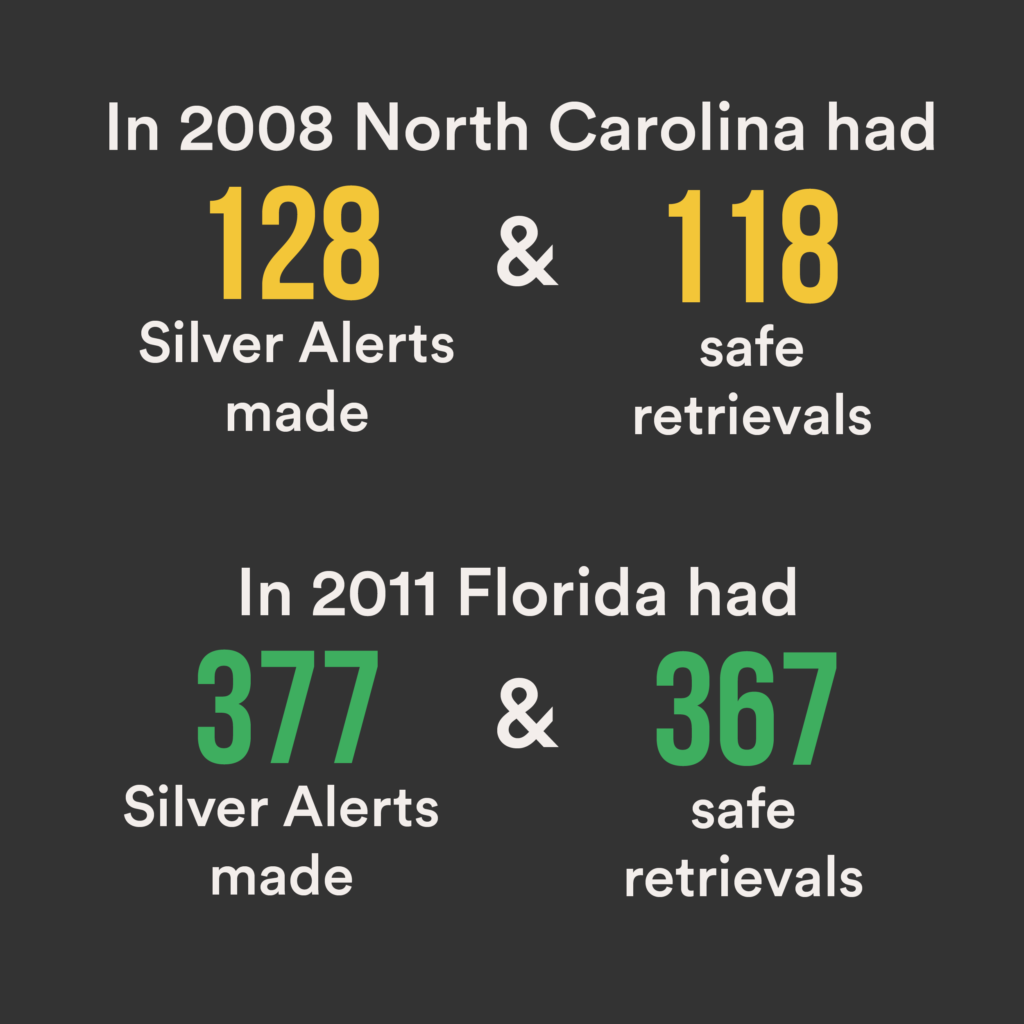 It is difficult to determine the efficacy of many of these programs, due mostly to the lack of standardization between states. Further research is required to enable organizations to make more informed decisions and modify their approach as needed. Some states with alert systems do not record in-depth information regarding outcomes, thus impeding precise statistics about outcomes. Gathering this information may require increased assets and infrastructure, which many states are unwilling or unable to put in place. Despite these many obstacles, available data suggests that the following are, at least to some degree, beneficial:

There were likely many more that were not adequately documented as well.

While these programs are undoubtedly useful to some extent and well-intentioned, they are not without criticism. Here is some of the concerns or arguments voiced about Silver Alerts:

Some have expressed reservations regarding color-coded alerts in general, believing them to potentially do more harm than good. They maintain that these sorts of notifications will lead people to disregard them out of hand, due to their excessive frequency, making it more difficult for authorities to recover children who may go missing. Owing to the poor quality of data collection regarding this topic, there is however very little evidence in support of this proposition. Those in support of SA believe that it is best to err on on the side of caution and do as much as possible to protect vulnerable individuals.

Another source of concern lies in the financial aspect of SAs. Some critics estimate that a national silver alert act would cost fifty-nine million dollars over a five-year stretch. Others argue in favor of NSAA, saying that the costs would be nominal, given that it would simply be a matter of utilizing already existing resources and infrastructure. Given the growing population of older adults, some argue that the country is in dire need of a national silver alert system regardless of costs.

Lastly, the potential for violations of civil liberties is a source of great concern to some people. There is often sensitive medical information publicized in these alerts, and the presumption of incompetence on behalf of the elderly in these cases, may run afoul of an individual’s right to privacy and autonomy respectively. There are safeguards in place to mitigate these abuses, such as limiting the information made available to the public, deleting medical information at the end of the case, and gathering evidence of mental impairment prior to making alerts. Also, it should be remembered that civil rights are not absolute and can be abrogated in the pursuit of what may be considered a substantial government interest, in this case attempting to save the lives of cognitively impaired or disabled individuals.

What are the types of medical alert and tracking systems that help monitor seniors with dementia?

Will Medicare or insurance pay for medical alert systems?

What types of information should caregivers obtain about patients at risk for wandering?

A number of states have adopted programs similar to the Silver Alert system, either in name or effect, though they are not standardized. There have been attempts made to coordinate the SAs throughout the nation with the National Silver Alert Act. Although the NSAA has never been enacted, there is hope that, as a result of public support for these measures, we will soon see an end to this nine-year trend, though no new NSAA has been put forth on the federal level as of yet. 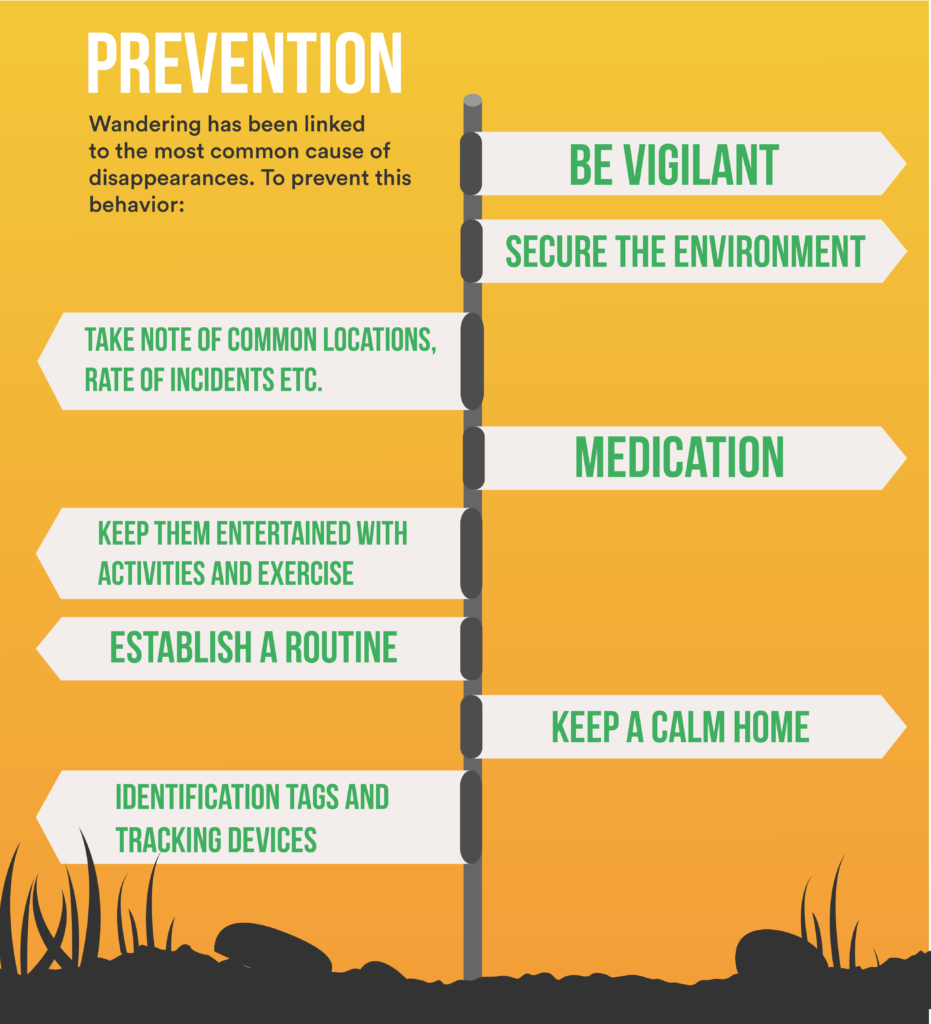 There are a number of reasons why an individual may go missing, but in the demographics towards which Silver Alerts are aimed, wandering is a common cause of disappearances. People with Alzheimer’s disease and other dementias are prone to wandering, due to the decline in their cognitive faculties and symptoms of restlessness and confusion. Six out of ten individuals with Alzheimer’s disease will wander at some point during their disease. As their disease progresses, disorientation and confusion will happen more regularly, leading to an uptick in wandering behavior, which can be very worrisome for caregivers and loved ones. In order to prevent or at least limit wandering by older adults with dementia or other disabilities, a number of options are available:

As the population grows in age and size, so does the number of individuals with cognitive disabilities and impairments. It is important to do all that we can to protect this vulnerable group, while finding ways to maintain their individuality and privacy. The fundamental goal of Silver Alerts programs is to quickly find missing people who are at increased risk of injury or death to ensure their safety. However, with the lack of federal resources for developing standardized Silver Alert programs, the qualifications may be overly broad and dependent on each state. To avoid such potential conflicts, it would behoove the federal government to improve coordination between states, which would enhance our ability to gather data and strengthen these efforts. A National Silver Alert Act would be incredibly useful. In the meantime, educating yourself about alert systems that are out there and what you can do is an important first step.